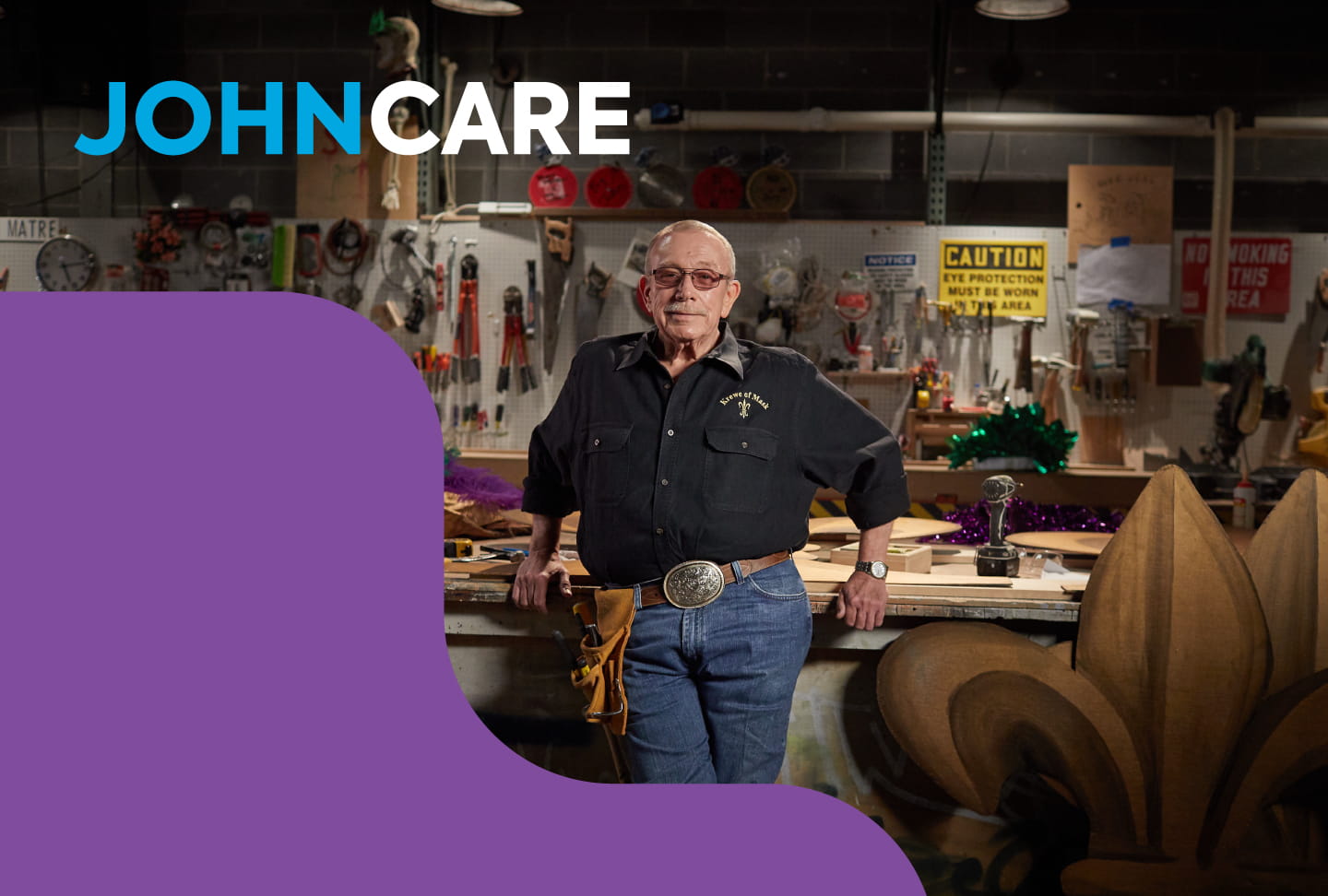 A master of everything Mardi Gras, John runs a local krewe and is a natural at building parade floats from the foundation up.

It seems "defeat" just isn't in John Cashen's vocabulary. A survivor in more ways than one, John has overcome not only a catastrophic natural disaster, but also fought cancer with unyielding resilience.

In 2005, as flood waters from Hurricane Katrina rose and threatened his New Orleans home, John took an axe to his attic's ceiling, climbed atop his roof and tied himself to his chimney so he wouldn't be swept away. Days later, no help had arrived, so John untied himself and swam to an overpass where he was rescued by a helicopter. He joined the rest of his family in Georgia.

Since then, John has become a proud citizen of LaGrange. A master of everything Mardi Gras, John runs a local krewe and is a natural at building parade floats from the foundation up. But when he was diagnosed with lung cancer in 2019, he summoned his fighting spirit, squared his shoulders, and faced his cancer journey head on.

For patients like John, there’s a lot of different aspects we take into consideration when creating a treatment plan. We pull all factors together—like general health, medicines, personal preferences and family concerns—to create the best care plan possible.

It all began with lung discomfort and tiredness that he just couldn't shake, no matter how much sleep he had each night. Concerned, he visited his primary care provider to get to the bottom of the issue.

After John's vital signs revealed low blood pressure, the doctor sensed something bigger might be happening behind the scenes. John underwent diagnostic testing, including bloodwork and X-rays, to find the cause of his fatigue.

"When the X-rays came back, my doctor noticed a spot in the upper left lobe of my lungs," John said, remembering the fuzzy dot on the X-ray screen. "I had been feeling tired and run down, but overall, I didn't feel that bad."

The troubling results pointed to a clear answer: lung cancer. Even though John didn't notice many red flags when it came to his health, his body was battling a disease he couldn't see.

According to Mayo Clinic, many patients may not experience any symptoms in the early stages of lung cancer. Once the warning signs — such as coughing, shortness of breath, chest pain and hoarseness — set in, the disease may already be at an advanced stage.

After a round of CT and PET scans, the concerning lung spot appeared to be growing in size, even after just a short few days.

Without delay, John was on a mission to find the right health partner to treat his lung cancer before it had the chance to spread.

Soon after the concerning X-ray results, John sought out the medical opinions of several different doctors. All of the professionals recommended a biopsy and other surgical means to treat his cancer.

However, John was firmly against any invasive treatments. That's when he crossed paths with Wellstar Radiation Oncologist Dr. Robert Taylor, who suggested a solution.

"When John first came into the office, he was very worried about the prospect of surgery," Dr. Taylor said, recalling their first meeting at Wellstar West Georgia Medical Center. "He knew about many cancer treatments and was seeking the least invasive option possible."

"SABR is like virtual surgery. Using X-ray technology, you can "reach" inside of a patient and virtually cut out the tumor," Dr. Taylor explained. "When the patient leaves a treatment session, they feel the same as when they entered. There is no surgery or downtime."

For John, this was the perfect, non-invasive option to take care of his cancer, quickly and effectively. He also left the consultation feeling like an equal partner in the process.

"Dr. Taylor explained everything to me clearly," John said. "He knew I wasn't a physician, so he spoke to me in a way that I could understand and laid out all my treatment options."

When building a custom care plan for any patient, Wellstar always takes a personalized approach.


Care right around the corner

A short time later, John began SABR treatments at Wellstar West Georgia Medical Center. With the most advanced cancer technology right in LaGrange, he didn't have to travel out of his way for treatment.

For the hard-working father and grandfather, the access to quick and convenient cancer treatments fit right into his busy schedule.

"Typically, this type of radiotherapy is delivered in about five separate treatments, in 30-minute intervals," Dr. Taylor said, explaining how the specialized treatment works. "The sessions are often done just a few days apart."

Without any incisions or other invasive measures, SABR uses concentrated radiation beams to target tumors precisely. Because his lung cancer was localized, the focused doses could treat the affected areas without damaging the healthy tissues.

Dr. Taylor was pleased with John's health progress throughout the treatment, and his prognosis was quickly looking up.

"John had no side effects and responded very well to treatment," said Dr. Taylor. "One time, he even asked if the machine was turned on because he couldn't feel a thing."

From start to finish, John kept a positive attitude about his cancer care. "The treatments weren't painful. It was a half-hour long, so just long enough for a good nap."

Wellstar offered support every step of the way, addressing John's concerns and crafting an effective cancer treatment plan. But the care didn't end when he left the building.

"During my treatment, the Wellstar team helped me through everything. Afterward, they would call me often to see how I was feeling and ask if I was eating enough," John beamed. "Wellstar is full of caring people. It's not just for show."

The radiation sessions were successful. Just months after the initial diagnosis, John was pronounced cancer-free. His yearly scan and monthly check-ins have all shown no signs of the disease returning either.

Now, John can get back to life and what really matters: planning his annual Mardi Gras parade for family and friends. Moving forward, he will always consider Wellstar to be an essential part of his health krewe.

"My Wellstar care team made me feel like I was a person, not an object they were trying to fix. Nobody treats you like Wellstar."