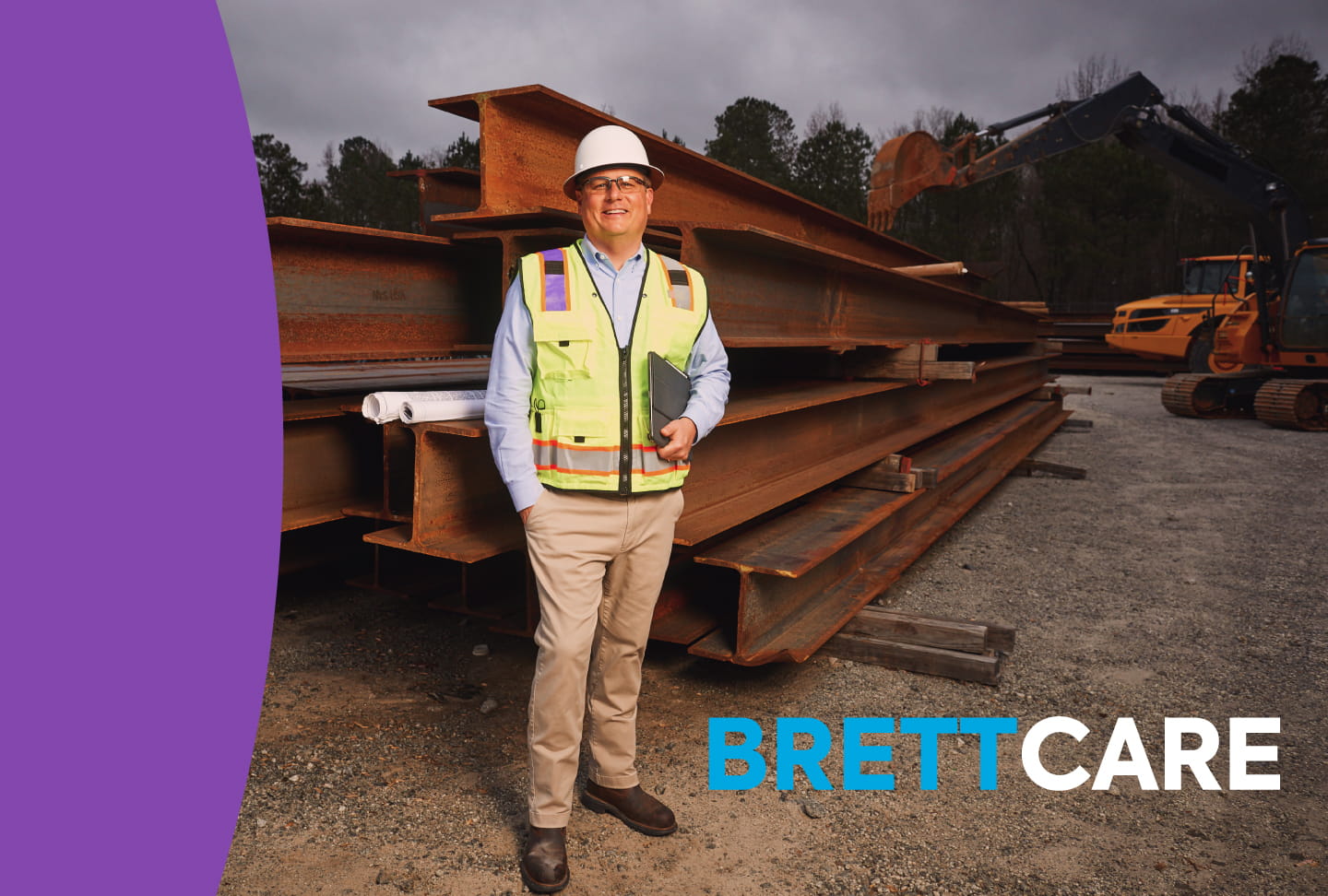 From diagnosis to treatment, Brett received cutting-edge cardiac care that saved his life, all from one health system, mere miles from his home.

After working in construction for more than 20 years, Brett Faucett knows all about the right building blocks. Piece by piece, a building comes together, but if one brick falls out of line, the whole system can crumble.

That’s why Brett knew something was wrong when the numbness started in his left arm. It came and went several times before he ended up behind the wheel of his car.

Sitting at an intersection, Brett was at a crossroads. He could turn right, attend his out-of-town business meeting, and ignore the sinking feeling inside. Or he could turn left and drive straight to the Emergency Department at Wellstar Kennestone Hospital.

“It’s really hard when you plan on going to work and you know people are counting on you. It’s hard to make that left turn and listen to your body.”

Brett took a deep breath and turned the wheel toward the hospital, forever changing the course of his life.

All heart attacks can be deadly, but a widowmaker heart attack is particularly dangerous. In Brett’s case, we had to act quickly to restore blood flow and prevent any damage to his heart.

In the nick of time

Though he didn’t know it, Brett was just minutes away from death when he arrived at Wellstar Kennestone Hospital. After a flurry of tests, Dr. Salvatore Mannino discovered Brett was having a “widowmaker” heart attack with a 99.9% blockage.

“When you’re 39 years old, you would never think, 'Man, I'm going to be dealing with a heart attack,'” Brett said. “When you're in a situation like that, your world is flipped upside down.”

From the technicians to the physicians, the Wellstar Medical Staff was there to offer support and reassurance every step of the way.

For this father of two, his treatment at Wellstar made all the difference. Less than 24 hours later, Brett was released from the hospital with no heart damage, and back home with his wife and kids.

“My family has a dad and a husband because of Wellstar,” Brett stressed. “As much as it’s a shock to the person that has the heart attack, it’s an even bigger shock for the family because they’re the ones that could have been left behind.”

After completing the program, Brett was able to move forward without missing a beat.

Listening to your body

A few years later, Brett sat on an airplane heading to Atlanta from a business trip. As the tires lifted from the ground, he broke out in a cold sweat and felt a nagging tightness in his chest.

“It felt like I maybe had bronchitis, just a little tightness. It was a completely different feeling than my first heart issue,” Brett recounted.

Even though he was more than 30,000 feet in the air, Brett knew he had to do something. After notifying the flight attendant of the situation, an EMS team was brought on the tarmac at Atlanta’s Hartsfield-Jackson airport. As soon as the plane touched down, Brett was rushed through downtown to Wellstar Atlanta Medical Center.

“When you have a second heart attack, you just don’t even know what to do,” Brett said, describing the intensity of the situation. “You don’t know how to even process that.”

After undergoing tests in the cardiac catheterization (cath) lab, Dr. Paul Douglass discovered a 40% blockage in a vessel that ran across the front of Brett’s heart. The cardiologist cleared the blockage immediately.

“It turns out Mr. Faucett had a new lesion that caused his second heart attack. Luckily, this time his artery didn’t require a stent.” Dr. Douglass recalled, noting that a stent helps prop the artery open, decreasing its chance of narrowing again. “However, to prevent a heart attack in the future, he was placed on a strict diet and aerobic exercise plan.”

After two days in the ICU, Brett was feeling like himself again.

During it all, Brett fondly remembers how Dr. Douglass treated him throughout the process. “He took a lot of time with me explaining everything. He made me feel at ease and helped me understand what was going on.”

To this day, Brett still regularly sees Dr. Douglass for any of his cardiovascular needs.

“Dr. Douglass walks the walk. Literally.” He laughed, remembering how he once called the cardiologist and caught him on the treadmill.

But Dr. Douglass wasn’t the only one helping Brett during his recovery.

“Caring for patients is a team effort with both the physician and the family,” Dr. Douglass said about Brett’s health journey. “His wife and children were instrumental in his recovery. They helped cheer him on through cardiac rehabilitation so he could achieve his health goals.”

From diagnosis to treatment, Brett received cutting-edge cardiac care that saved his life, all from one health system, mere miles from his home. Brett and his entire family continue their wellness journey with Wellstar, whether that’s making sure he stays healthy or scheduling routine check-ups for his two kids at Acworth Health Park.

“Wellstar covers all my family's health needs,” Brett said about the comprehensive care he and his family have received. “The way Wellstar has taken care of us is world-class. We feel like we’re the only patients they have.”

One of the biggest lessons Brett has learned is to listen to his body as he gets older. “When you’re younger you feel like you’re bulletproof, and nothing could ever happen to you. One thing I would advise is making sure that all men of all ages have some kind of health screening at least once a year.”

Brett knows his cardiac episodes are just a couple of chapters in his health story. To keep making progress, he must continue to choose to live a healthy lifestyle and be an active participant in his wellness. But with Wellstar, he doesn’t have to do it alone.

“Everyone has a health story that gets written,” Brett said. “And there is no other place that I would want my story written than at Wellstar.”